I am the queen of setting goals.

The higher I can aim, the better.  I remember one year, when I blogged at Journey to Ithaca, my resolutions were: eat less poison, get completely off the grid, produce no more than one grocery bag or garbage per month, put together a 12-piece wardrobe, and have my Christmas shopping done by December 1.

I did eat less poison and put together a 12-piece wardrobe.  And with the other goals, I learned a lot about goal setting.

Another case in point?  My efforts to exercise consistently and lose weight.

I tried to start exercising my senior year of high school, when I was still thin.  After a year of therapy and medication, I had successfully quit my meds and was sitting in my last therapy session.  My therapist was not stellar (in fact, I had to go to therapy as an adult to unlearn a lot of things that I learned from the professionals I worked with during that time of my life!), but she did have one nugget of advice to give me.  When I asked her what I could do to help maintain my mental health, she was adamant that I start an exercise program.

I set out to do some research, and I learned that our local community center offered a free step class for high school students.  I eagerly attended and felt comfortable amongst the teens of various shapes, sizes, and ability levels in the class.  Our instructor was a cheerful 20-something named Jodi, with a bouncy pony tail.  We all really liked her.

I went to that class for about 6 months, until I graduated.  It was a few months until I got brave enough to attend my first class as an adult.

I started at the community center, since it was familiar.  But I noticed that the adult classes lacked community.  I also noticed that my heart rate often got too high during class, so I had to use less support under my step and smaller weights.  I became very self-conscious about this.

In the brochure for the community center, was an ad for a new women’s fitness center.  I went there and immediately loved the community!

What I did not love, were the large mirrors.  I was skinny and weak.  I could noticably do less than everyone else.  I paid for 28 classes, but stopped attending before I used them all.  When I thought about going back, the center had gone out of business.

When I first got married, I visited a local health club.  They offered me a great deal and a trainer put me on a program.  However, I looked so weak compared to the teenage athletes who were also working out, that I only went there twice.

I did a couch-to-5k plan from Prevention magazine. I followed it until I was running 5 miles…Until I ran past some redneck teenagers in our neighborhood, who followed me, mocking my slow running.

It was 10 years before I tried working out again.

I have told my hit and miss yoga story here, but the short version is that I did not stick with a work-out  until I found a tight-knit, small yoga studio with a teacher who was patient enough to work with anybody.  And only then, did I notice the benefits I was gaining from yoga, to the point where I experience physical pain and noticable mental differences if I miss more than 2 classes in a week. 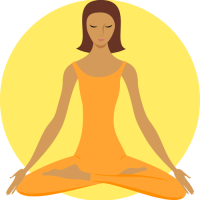 Diet is the same pattern.  I tried diet after diet, giving up when I “slipped up” or “fell off the wagon.”  Weight Watchers, in the end, left me with no excuses.  It was only acceptable to speak of your journey in positive terms, and it became easy for me to see how much happier I am when I am eating well.

Recently, I regained 9 pounds.  But when I finally weighed myself, I also noted that I have kept 19 pounds off.  It’s not even a matter of the glass being half full, versus half empty.

So I am getting back on track.

So are you planning on making any New Year’s Resolutions?  If you are, here are some lessons I have learned from my experience in setting (and achieving!) goals:

Why are you not motivated to stick with your changes?  Is there a good reason?  Before you judge or muscle your way through, look at your reasons for quitting.  I quit the step classes because I was self-conscious and needed a close-knit community without mirrors.  I quit the yoga classes at the gyms, because I did not feel like I belonged.  Once I found an exercise program that met my needs, motivation was no longer an issue.

We are all different, and everyone struggles with something.  If you are struggling with making a positive change, then the thing you are trying to change is not easy for you.  So don’t compare yourself to the people who have it easy!  Close your eyes, and make your best the only thing that you need!

Slip-ups are a part of making changes.  Growth is not a straight line, but it is a general trend.  I regained 9 pounds, but I have still kept 19 off.  Focus on the 19, not the 9.  You are going to fall on and off the wagon.  That is life.

When you are frustrated, don’t talk to just anybody.  Some friends will help you focus on the positive, and others will discourage you further.  Learn to tell the difference.

What positive changes are you working on in the upcoming new year?  What strategies have you found to be helpful when making changes?

16 thoughts on “Preparing for Those Resolutions”