I’ve been doing well, just out living life and waiting to find more inspiration.  And during my time away, I rejoined Facebook!  There were many reasons for my decision, the most important being that I am in a lot of groups that communicate information through Facebook.  So I have rejoined, while seriously limiting the time I spend on the site.  It doesn’t seem to pull me in like it used to.

But there is one trend I have noticed on Facebook, that I want to talk about, because I have found that it makes me angry.  And that is mental health memes.

I have made no secret out of the fact that I have faced emotional challenges.  I’ve dealt with panic attacks, self harm, and a whole variety pack of issues.  And yet I find that the spreading of “awareness” can do more harm than good.  And the memes and popular messages have spread a view of mental illness that has led people away from recovery and healing.

Here are some reasons why I am not a fan of mental health “awareness” memes: 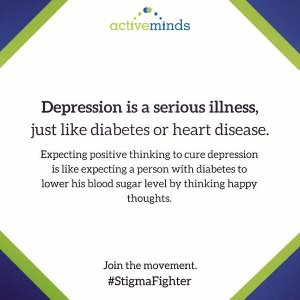 First off, mental illness is not always caused by a chemical deficiency.  And secondly, while psychiatric medication have worked miracles for some people, studies have shown that they are not effective in many cases.  And whether or not someone takes medication, studies have shown that cognitive-behavioral therapy, yoga, exercise, dietary changes, and other non-medical approaches can be helpful for depression and anxiety.

It is not simply a physical issue that is corrected by taking medication.

The worst example I have, of this misunderstanding, happened when I was in a very traumatic situation.  I was starting to have physical symptoms whenever I had to re-enter this situation.  I would get muscle aches, a fever, and anxiety symptoms.  Some of my acquaintenances urged me to get medication, rather than leaving the situation.  I said that I did not want to take a pill that would make me like being treated the way that I was.

When I left the situation, my symptoms disappeared.

While it is important to take emotional issues seriously, saying that depression is “like diabetes” is an oversimplification.

If you read enough memes, you will have an easy time diagnosing yourself with mental illness, whether you have one or not.  There has been so much labeling and pathologizing, that we have forgotten that every human being faces struggles.  Everyone feels sad at times.  Everyone gets anxious.

This has been harmful, because we have no tolerance for those emotions in others.  It is like the friends who told me to go on medication when I was in a disturbing situation.  The anxiety and fear I was experiencing were a very reasonable response to being in that situation.

Once I was out of the situation, I temporarily had a reaction to having been through the trauma.  My startle response was heightened significantly, and I had very low energy.  While a number of friends told me that this was PTSD or anxiety (and insisted that I get medication), my therapist had other ideas.  She said this was simply my response to having been through trauma, and that it would lessen and eventually go away once my mind was feeling safe again.  And she was correct.

While we need to be supportive of those who are legitimately facing anxiety, depression, and other mental illnesses, we need to stop diagnosing (and thereby dismissing) our friends who are actually going through upsetting situations.

The most disturbing trend in mental health memes are the ones that are intended to be funny.  They are designed to make light of mental illnesses such as anxiety and depression, by illustrating some of the experiences and showing the reader that they are not alone.

However, these memes (like nearly all mental health memes) always focus on the problems, rather than the solutions.  Their humor value lies on hopelessness about the situation.  Would they be as funny, if there were a chance to learn tools and recover from the depression or anxiety?

I used to have panic attacks.  It tooks YEARS of work for me to recover, but, in the end, I did recover.  I went from having multiple panic attacks a day, to having none.  It wasn’t easy, and it required a lot of persistance and patience.  And it was HOPE that kept me going.  Had I been convinced that it was hopeless, I would still be suffering today.

The popular thinking, that depression and anxiety are untreatable, leads a lot of people into hopelessness.  It leads people to avoid treatment and self-help measures, and it keeps people on “treatment plans” that don’t work.

While I understand that this meme is saying that you should not give unsolicited advice, it would not have gone as viral if the girl in the wheelchair had said, “Have you tried medication?”

And yet, as mentioned above, yoga has been proven–just as scientifically as medication–to be helpful with mental health issues.  Memes like this promote the same hopelessness as the meme shown above.

There are a lot of roads to recovery, and few people recover with medication alone.  Bombarding people with the message that so-called “alternative” treatments don’t work, is not promoting awareness.  It is promoting misinformation. 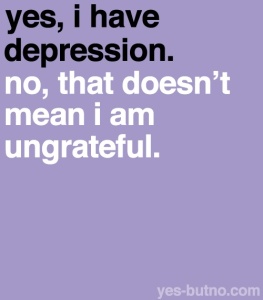 A number of memes explain why people with depression and anxiety act the way they do, while saying (either explicitly or implicitly) that they are excused for acting this way.  Yes, when a person is suffering, it is hard to be kind to others.  And yes, when someone is depresssed or otherwise suffering, they may slip up and say the wrong thing.

But that doesn’t mean anyone has the green light to do that indiscriminately.

If there were no possibility of recovery, things would be different.  Then having fewer boundaries would make sense.

But in my case, it was boudaries and personal responsibility that led me toward recovery.  Two very dear friends of mine pulled me aside (on separate occasions, unbeknownst to each other!) and told me that I needed to get professional help, that they were not my therapists, and that it was not acceptable for me to constantly be texting them everytime I felt panicked.

Does this sound harsh?  It would be, if there were no such thing as recovery.

But those conversations led me to my therapist, who taught me tools to work through those panicked emotions and helped me to maintain healthier friendships.  I am much closer to those two friends, now that our friendship is a two-way street, and I have learned to manage my emotions and thoughts, so that I no longer feel panicked and desperate. 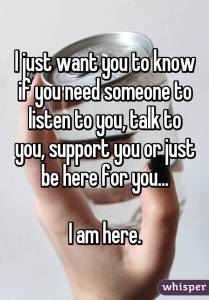 There are countless memes and copied statuses about how the person is there to listen.  And yet, that person is probably not getting bombarded with texts from friends who are struggling.

Posting these memes is the easy way out.  It’s slacktivism.

Being there for people involves forming relationships.  Someone is not likely to spill their guts to someone they don’t have a relationship with.

Being there involves truly listening to those around us.  It means listening to their words and asking questions, rather than just waiting for our turn to talk.

It you want to be there for someone, start being there–in real life–right now.

7.  Suicide hotline memes are not enough.

There are a lot of suicide hotline memes and copied statuses.  And they are marginally helpful.  Calling the hotline could help someone in crisis.

One of the questions was, “If someone attempts suicide, will they continue to struggle with suicidal thoughts for the rest of their life?”

The classroom was full.  And two other people were standing with me in the back of the room.

Our culture believes that there is no recovery from suicidal thoughts.  And yet I have not struggled with them, since my attempt over 20 years ago.

And I am not the exception to the rule.  Martin Luther King Jr, Johnny Cash, Elton John, Billy Joel, and Oprah all tried to end their lives, before finding recovery and going on the accomplish amazing things.

Tragedy and hopelessness make interesting stories, but if we really want to spread awareness, we need to spread the TRUTH.  It is time to start spreading the message of recovery.